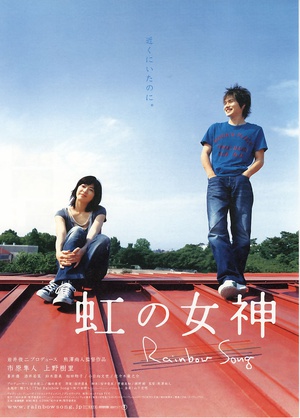 Tomoya, a production assistant for a television company in Japan, hears the news with the rest of the crew that Aoi has been killed in an air crash in Death Valley, California. He reflects upon his friendship with this feisty young woman who left the country to broaden her horizons as an aspiring director. He took the job she left, and ironically they first met when he attempted to bribe her away from her job at a record store so that he could be near her co-worker, a girl he wished to date. Although considered a nuisance at first, Aoi finds him a bit of a kindred spirit and casts him in a leading role in her college student film, "The End of the World" which she has written and will direct. Aoi takes the leading role opposite Tomoya when her leading actress Kyoko refuses to do a kissing scene. The two continue to console each other about their lack of romantic relationships and job opportunities in an outwardly platonic manner, but underneath deeper currents are running. Aoi's younger sister Kana may be physically blind, but she sees some emotional aspects of life more clearly than the normally sighted people in her life.